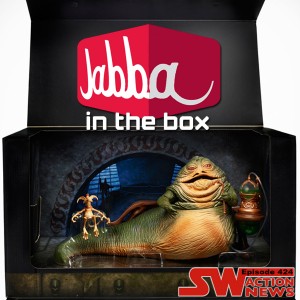 In this episode the hosts of Star Wars Action News look at the Episode VII casting announcement, new toy offerings by Disney, report from the Toy Man Toy Show, and much more! Star Wars Action News is back and with May the 4th behind us there is tons of collecting news to talk about. Sideshow Collectibles has released more than half a dozen new products in one-sixth, one-quarter, and full scales; Disney Stores have stocked up on exclusive figures, plushies, and statues, and Hasbro has revealed their San Diego Comic-Con Exclusive Jabba the Hutt! Listen as Marjorie and Arnie discuss all the latest news in this podcast. Also on this show, Steve the Gingerprince hasn't had much time to collect lately but he made up for it over May the 4th weekend at Star Wars Fun Days. Listen as he reports in on all the finds across the pond. And joining in also is Jerry with a look at pseudo-Vintage Star Wars items. With a stand-ing report by Scott From Tulsa, a look at last weekend's Toy Man Toy Show, collecting news from Star Wars Celebration Anaheim and reactions to the Episode VII casting news, it's all in the latest Star Wars Action News podcast! Download the show now at swactionnews.com
Collecting, Hasbro, Podcasts, Sideshow Collectibles, Star Wars, Star Wars Action News
Prev Article Next Article