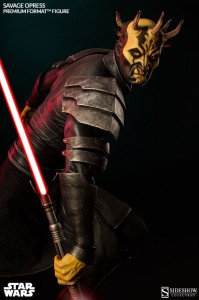 as they continue their high end line of Star Wars memorabilia.  First up is a new Premium Format Figure — Savage Opress.  As seen in The Clone Wars cartoon series, Savage is the Zabrack brother of Darth Maul.  Transformed into an unstoppable killing machine by Nightsister magic this character has been everything–Sith apprentice, rogue assassin, loyal brother, and more.  And now you can own this reproduction of the character in 1/4 scale.  Standing over 21-inches tall, weighing 15 pounds, this statue can stand alone or compliment Sideshow’s previous Darth Maul Premium Format Release. 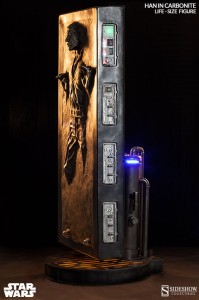 But for the big spenders out there, Sideshow also has quite the trophy for your collection:  A life sized Han Solo in Carbonite.  Icons’ version of this piece has been sought by collectors for nearly two decades, but now Sideshow has rendered that older piece obsolete.  Standing on a platform that recreates Cloud City’s carbon freeze chamber, with a light up side panels and rear power canister, this is quite simply the most accurate prop replica ever made of this piece.  Standing 7.5 feet tall this is a true centerpiece for Star Wars collectors. 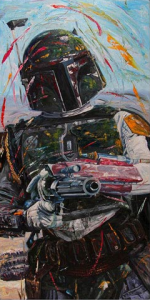 But after two high priced items, how about a bargain?  Today only (April 10, 2014) Entertainment Earth has on sale the Boba Fett: A good Day to Die Giclee Print from Acme Archives.  This art print is 19-inches tall and 13-inches wide and was limited to only 50 prints worldwide.  From artist William Silvers this print has artistic flourishes that accent the artistic nature of the print while also showing the bounty hunter in all his glory.  It’s 34% off, only $95, until midnight tonight so order yours now!

New Podcast: Episode 393: We’ve Got the Need, The Need for Theed

New Podcast: Episode 411: Get the 411 On Star Wars Discounts