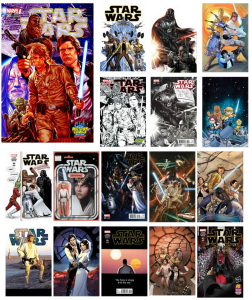 Will Marvel’s Star Wars #1 end up as a free giveaway at comic stores and cons across the country?

Marvel does their incentive covers, such as “For every 150 copies of the base cover you order, you can also order 1 of this variant cover.” THIS is why Marvel’s Star Wars #1 has sold more than one million copies.

I have no doubt the first Star Wars comic from Marvel in 30 years will sell very well. It will have a huge sell-through…but one million copies seems unrealistic in today’s comic book market.  Star Wars author and comic historian John Jackson Miller reported at his site Comichron the last comic to have over a million copies ordered was likely Batman #500.  For perspective, that was in 1993 just before the comic market collapsed.

I really suspect that retailers are going to end up sitting on thrones of unopened boxes of Star Wars #1.  At cons, free comic day, and more, I think Star Wars fans will see these comics sitting out.

I’m not worried about local comic shops losing their shirts on this deal.  The reason incentive and variant covers carry such a high price tag is because the stores factor in the cost of ordering so many extra comics that may never sell.  From increased interest in the title at all, the headlines (such as this one) promoting its release, and the obscene number of variant covers, Star Wars #1 will sell well.  This is great news for ailing local comic stores.

Yet I still envision the lost ark from Raiders surrounded by crates and crates of unsold copies of Marvel’s new Star Wars #1.

So if you really aren’t in a hurry and don’t care what cover you get of Marvel’s Star Wars #1…I’d suggest keep your wallets in your pocket and just wait. Deep discount at a MINIMUM; boxes of them for pennies on the cover price dollar. Maybe even stacks of freebees.

Agree? Disagree? Let me know in the comments.