Update – Chewbacca out of Wave 4 Case, Stormtrooper, Boba Fett Back in

Update – Chewbacca out of Wave 4 Case, Stormtrooper, Boba Fett Back in 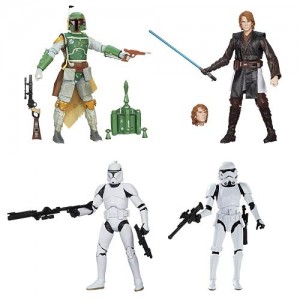 Chewbacca will no longer be part of Hasbro's Star Wars 6-Inch Black Series figure line.  The Episode III Obi-Wan figure is also no longer included.  Instead the wave will include carry-forwards of the hard to find 6-inch Boba Fett and Stormtrooper figures. We first reported the rumor that Wave 4 of Hasbro's 6-Inch Black Series action figure line may not have Chewie included.  This wave was originally solicited as three new fligures (Chewbacca, Anakin Skywalker, and a Clone Trooper) plus one carry-forward (the truly awful Episode III Obi-Wan Kenobi, watch our review of this figure on Star Wars Action News Episode 421).  Per the rumor, Lucasfilm did not like Chewie's hunched pose in the small window box and the figure may be delayed until the new blue and black, taller window box was used. Now DorksideToys.com has revealed that rumor was true, Chewbacca will not be included in Wave 4.  Instead of Chewbacca and Ob-Wan Hasbro has included the two hardest to find figures in this line:  Boba Fett and the Stormtrooper.  Clearly this will help fans get these figures at retail pricing.  With the Stormtrooper and Clone Trooper in this wave it's possible Boba Fett may even become common as troop builders, buying multiples of just those two figures, leave droves of the bounty hunter behind. Are you excited by this change, or upset at Chewbacca's delay?  Let us know in the comments below!
Black Series, Boba Fett, Chewbacca, Collecting, Entertainment, Film, George Lucas, Hasbro, Movie, Movies, News, Star Wars, Star Wars Action News, Stormtrooper
Prev Article Next Article

1 thought on “Update – Chewbacca out of Wave 4 Case, Stormtrooper, Boba Fett Back in”