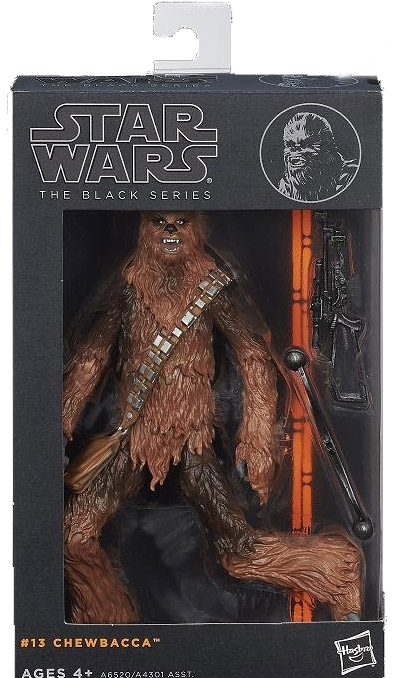 Could Hasbro have a problem with Chewbacca?  That is the word that comes to us from a reliable source in the UK.  Please note everything in this article should be taken as rumor until confirmation from Hasbro.

At Toy Fair International 2014 Hasbro announced the new package for the Star Wars Black Series figures.  At the time they said the new box with the larger window area allowed for inclusion of taller figures into the line, such as Darth Vader and, yes, Chewbacca.  But even with the new box design the Chewbacca figure, based on actor Peter Mayhew’s 7′ 2″ height, had to be squeezed in, his knees and legs bent to fit in the space allotted.  As Han Solo might say “I don’t think they had wookiees in mind when they designed her.”

Per our source, this odd posturing of Solo’s hirsute companion had originally been approved by Hasbro’s partners at Lucasfilm Licensing, but now they have reconsidered and dictated that Hasbro needs to find another way to let the wookiee in.

Chewbacca was intended to be one of three new figures in Wave 4 of this action figure line, along with an Episode II Clone Trooper and Episode III Anakin Skywalker.  That wave was expected to ship to stores and online retailers in the next 2 months.  Per our source, that wave may now need to be delayed.

However, this may end up being good news for Star Wars collectors.  Rather than delay the entire wave, our source tells us that they may ship Wave 4 as planned, but replace Chewbacca with an older figure in the line, and the top two choices being considered are Wave 2’s Boba Fett and Wave 3’s Stormtrooper.  Both figures have been difficult to find at retail and secondary market prices have been high, so a rerelease of either figure would be welcome relief for struggling Star Wars fans.

Once more, all of this is unconfirmed rumor at this time, but we wanted to make you aware as soon as we could.  Obviously the final news will be known if/when this wave is delayed, reconfigured, or if Chewbacca shows up in a radically different pose than Hasbro’s pre-release promotional photos.

Got any news?  E-mail us at show@swactionnews.com!