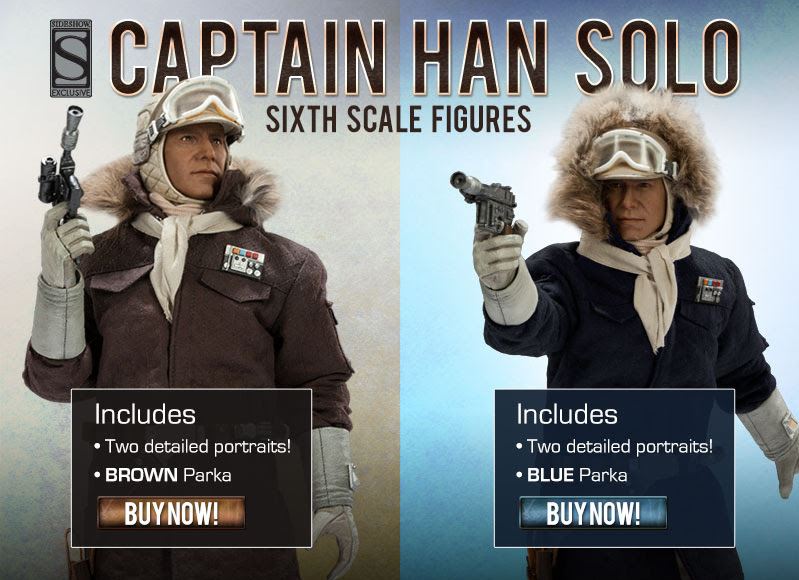 The color of Han Solo’s jacket on Hoth seems to endlessly be a bane for collectors.  Depending on the lighting, the lens filter, and the shot, sometimes in The Empire Strikes Back Han’s coat looks decidely brown.  In other shots, it’s blue.  Collectors often seem to side towards blue, their memories influenced by Kenner’s Hoth Han Solo figure with its striking blue coat.  But as the years have passed the question kept coming up, wiht some Hoth Han Solos using a blue/brown color to split the difference, and Hasbro even releasing variants of the same figure with two colored coats.

But now for high-end 1/6 scale figure collectors a choice must be made–indecision will be costly.  Continuing their line of Hoth themed Star Wars figures, Sideshow has put up for order today Captain Han Solo in Hoth gear.  But there are three versions of this figure being released!

The primary figure is Han Solo in Brown Hoth Coat.  This is not currently listed on Sideshow’s site (presumably it will be available through Sideshow authorized resellers in the regular version), but from Sideshow comes this exclusive version which has a swap-out head giving you the choice to display Han with or without his headgear on.  So that is two versions–Brown Coat regular edition, and Brown Coat Sideshow Exclusive Edition.

But, in the words of the infomercials, “Wait, there’s more!”  There is also another version of the figure that is also exclusive to Sideshow Collectible–Hoth Han Solo with Blue Coat.  This figure also has the same swap-out head as the Sideshow Exclusive Brown Coat figure, it’s the same figure in every way, save that the coat is now blue.

Both figures, Blue Coat or Brown, have

At $199 per figure buying both is a costly option.  So let us know in our forums, will you be buying the Blue Coat Han, the Brown Coat Han, or both?

Episode 479: We Collect Eternal…Shiny and Chrome!