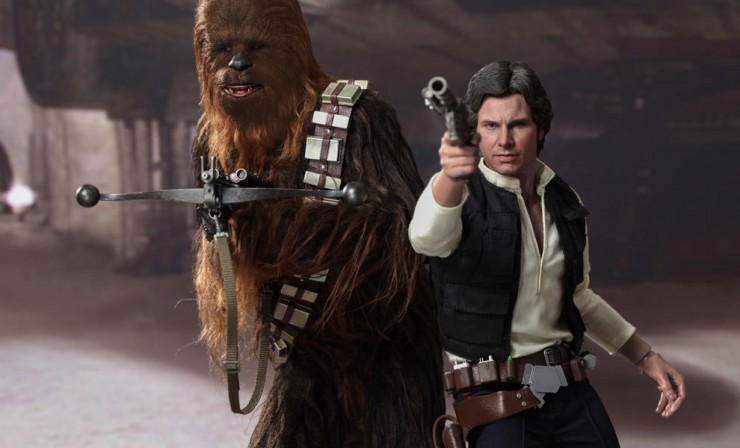 Over the past six years Hot Toys has emerged as the superstar company for 12-inch highly articulated, collector-oriented action figures. Their product lines in the past have ranged from Robocop to Predator to Terminator to even one-offs like Michael Jackson and Back to the Future.  But where they've really shown is with their Marvel Movie Masterpiece Series figures.  From Blade to Iron Man to Spider-Man to Ghost Rider, Hot Toys has amazed and astounded with their actor-accurate facial likenesses, the attention to detail, and the seemingly endless number of accessories, including interchangeable hands, feet, and heads, that come with their figures.  Even the boxes each figure come in is a work of art. I have covered Hot Toys figures for three years on the Marvelicious Toys podcast, and own every single Marvel Movie Masterpiece figure they have done--the only 12-inch line I am 'all in' on.  Their quality and workmanship is unmatched.  I've often wondered why Sideshow's 12-Inch Star Wars line could not match the quality of Hot Toys' Marvel line. Sideshow and Hot Toys did partner once in the past, for Sideshow's 12-Inch Bespin Luke Skywalker figure.   But now Hot Toys has gotten the licence for their own lines of 1/6 scale and 1/4 scale Star Wars figures and collectibles. Right out of the gate come not one but two sixth scale Movie Masterpiece Star Wars figures--Han Solo and Chewbacca.  Available individually or as a set, these two smugglers are ready to join your collection. The Han Solo figure features Plus if you order the Sideshow Exclusive edition you also get a Stormtrooper belt and blaster rifle! Chewbacca comes with:

And if you order the pair together you get everything listed above (including the Stormtrooper belt and rifle) plus an additional accessory exclusive to the set--a heavy blaster for Chewbacca to wield. Long time Sideshow sixth-scale figure collectors, there is no word yet on how the scale of Hot Toys' figures will fit in with Sideshow's long-running line.  As Sideshow uses their own figure bodies for most of their figures there is a chance these figures may look slightly taller or smaller than their Sideshow counterparts.  This is not an evolution of Sideshow's figure line, but an entirely new sixth scale figure line from Hot Toys. It is canny of Hot Toys to be out of the gate with Chewbacca--a figure Sideshow has long teased but never brought to market. However, and this is ironic, the only authorized US seller of Hot Toys is Sideshow Collectibles.  As mentioned, I have purchased many Hot Toys figures, but as with any detailed piece  I have received a fair number of damaged and broken figures and accessories.  Hot Toys will not provide a warranty on any product purchased at an unauthorized reseller.  The one Hot Toys figure I purchased from a reseller other than Sideshow, Hot Toys would provide no repairs and the seller could not offer a repalcement.  If you are interested in the Hot Toys Star Wars line, my strong recommendation is you only purchase from Sideshow Collectibles, or risk having a damaged or broken piece with no recourse. As for these figures, you can hear my first impressions on this Monday's episode of the Star Wars Action News podcast! In the meantime, head over to Sideshow's site and check out these new figures.  If you order, please consider supporting our site and our podcasts by using our affiliate link!
Avengers, Blade, Collecting, Enertainment, Film, George Lucas, Hot Toys, Iron Man, Marvel, Marvel Comics, Marvelicious Toys, Movie, Movies, News, Podcasts, Pre-Order, Review, Reviews, Sideshow Collectibles, Spider-Man, Star Wars, Star Wars Action News, Toys
Prev Article Next Article